Atrazine, 2-chloro-4-(ethylamino)-6-(isopropylamino)-s-triazine, an organic compound consisting of an s-triazine-ring is a widely used herbicide.
Its use is controversial due to widespread contamination of drinking water and its possible associations with birth defects and menstrual problems when consumed by humans at concentrations below government standards. Although it has been banned in the European Union, it is still one of the most widely used herbicides in the world. 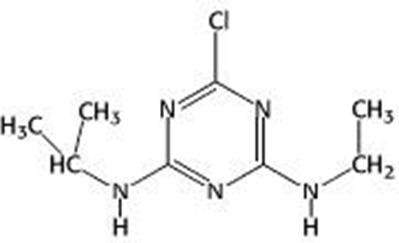 Email ThisBlogThis!Share to TwitterShare to FacebookShare to Pinterest
Labels: other chemical molecules, structures